In the context of Sol.E.D project 3 Volunteers, Nikos, Nora and Aggelos, who joined the program in the last 4 months, implemented their Volunteering Placement with the organization “Viaje a la Sostenibilidad” partly in Zaragoza, Spain, and partly from home, due to the irregularities caused by the pandemic.

As it is the case for every ESC project, each of our Volunteers had a designated tutor, who was their key reference point for task-related support, and a mentor who helped their smooth integration in the social and cultural life in Zaragoza and facilitated their self-reflection and personal growth through this learning experience!

At the beginning of their placement, Nora and Nikos, had an “orientation week” to get familiarized with the working environment and team, and learn about the operations of the Hosting Organization. As a team-building activity with the other international Volunteers, they also had an excursion to Moncayo Mountain and climbed to the top, as a means to exceed their limits and get out of their comfort zone.

At the same time, Nikos and Nora, started their Online Language Courses, to increase their skills in Spanish. To achieve this goal, the policy of the Hosting Organization, was also very helpful, as all Volunteers needed to communicate with their tutors and colleagues in Spanish, as much as possible for their level of proficiency. 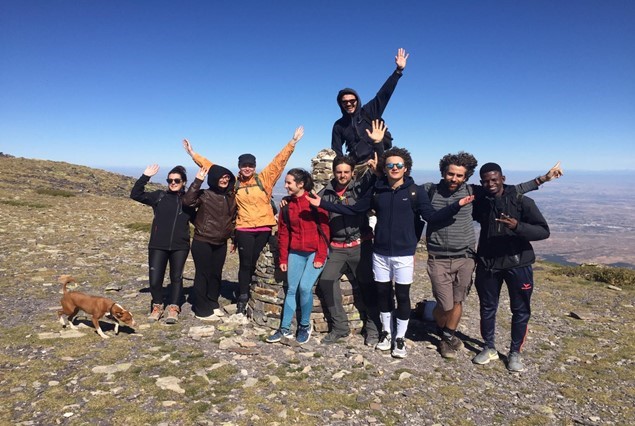 As time progressed, the Volunteers adapted to their new home and working environment and got involved in many different activities:

Workshops for children of the Santo-Domingo School

The Volunteers’ work in the school also included the support to teachers in the classroom through interactive activities, and the organization of English-language classes with discussions on recycling and other environmental subjects. Lastly, Every Friday the Volunteers took the sixth graders for a walk in the Gancho neighborhood to visit other different organizations that help society through social activities and anti-racist speeches.

Enrichment of the “Garden”

In the context of promoting environmental awareness and the “green” way of life, our Volunteers had undertaken the remodelling and care of the Huerto, an outdoor space (Garden) that was offered specifically to the volunteers of Viaje a la Sostenibilidad, in the context of its collaboration with the  school of Zaragoza Municipality.

Huerto serves as the environmentally friendly space, where citizens of the wider community, were given the opportunity to have open discussions about the environmental issues of their concern, as well as about emerging green initiatives and programs in the local community.

During the project, Nikos and Nora, took part in the organization of different seminars and public discussions on environmental, solidarity and youth issues in Huerto, open to students, teachers, parents, and the local community to encourage public discourse on environmental matters.

In collaboration with the school, our volunteers also organized events for the “Clase de Familias / Family classroom” of the municipal school with the goal to introduce immigrant families into a more Zero Waste life (e.g. Sewing workshop with a professional sewer, so that families could give a “second life” to old clothes)

The Volunteers have also participated in the “Feria” events, in the context of which they set up kiosks with leaflets to inform passers-by and play games, with the aim of raising young people’s awareness on sustainability issues.

Moreover, the Volunteers have organized an effort to raise awareness on the issue of racism, and promote equality and diversity at school. Specifically, they organized talks in the classroom about stereotypes related to gender, religion, disability, health problems and down-syndrome, interviewed pupils and young people of the community, who have experienced discrimination and/or racism, as well as activists, who are opposing it.

On the 6th month of the program, Nikos and Nora, had to return to Greece due to the pandemic, but continued to work on the program remotely. They worked on the Host Organization’s platform and the creation of dissemination material to promote ESC and Erasmus+ Youth programs. At the same time, they started developing their own proposal for a Youth-Mobility project called “Reco-Nature”, utilizing all their knowledge and experience in the design of the activities. The project was approved and took place on a farm in Aragon next to the Pyrenees Mountains in June 2021. The aim of the project was to put nature’s protection as a priority of European youth and to promote self-sufficiency in the primary sector, by teaching youth how to produce their own food, as well as other products such as organic soap, deodorant, antiseptic, etc.

On the 8th month, Aggelos joined the program as a remotely working volunteer of Viaje a la Sostenibilidad. Together with Nikos, they continued to work on the dissemination of Erasmus+ projects, and undertook research on funding opportunities concerning topics related to the environment, sustainable energy, biological products, climate change and youth programs, in order to create a database that will facilitate the organization’s work.

Moreover, they developed a green guide on the use of raw materials and sustainable life habits in general, which was uploaded on the organization’s website and is composed by different columns:

As dictated by the ESC rules and principles for every Volunteering program, our volunteers were called to work on a personal project concerning any topic of their interest that could address the needs of the local community, allowing them to go through the whole process of transforming one of their ideas into reality to achieve an actual impact on their environment.

Nora, in collaboration with a French Volunteer, took the initiative to organize an Eco-Workshop (“Ecotalleres”) open to young people in the local community to promote the concepts of circular economy, zero waste and a sustainable lifestyle. The workshops took place every 2 weeks in a specially designed area of the Hosting Organization. During the sessions of this workshop the participants created personal care products (deodorant, body cream, lip balm, soap, general purpose sponges, hand-sanitizers etc) from natural ingredients as well as old products that would be thrown away, thus giving them a “second life”.

Nikos added a new line of activities in Huerto, offered to children of the public school and the neighbourhood.  During this series of activities Nikos together with the children planted crops with biological practices, watered and cleaned the Garden. This process was delivered in the form of play/interactive activity, through which children learned from an early age how useful the cultivation of the land is, how we can be autonomous with our own garden, and what benefits this entails for the environment.

Aggelos, who implemented his volunteering program remotely, organized a Webinar on the environmental changes by and lessons learned from the Covid-19 pandemic. This webinar was open to youth all over Europe, and included: i) an overview of the human presence on Earth and the impact of human activity on the planet ii) interactive activities for reflecting what the pause of human activity due to the pandemic has taught us iii) a photo-contest on young people’s observed changes iv) an interactive discussion on changes we could make in our lifestyle to become more sustainable v) a practical workshop on how to turn an old T-shirt into a mask.

End of the Placement

Upon their arrival back home, EKO had a “post-project” evaluation meeting with our Volunteers, in which Nikos, Nora and Aggelos could make an overarching evaluation of their volunteering experience and reflect on how they could utilize their experiences in their future pursuits for further education, employment or civil society engagement.

Together we explored available possibilities in the context of different programs under the ESC or other contexts:

As a follow-up, Nora has found a job-position as a psychologist in a refugee camp in Lesvos, Nikos has continued collaborating remotely with the Hosting Organization Viaje a la Sostenibilidad and is currently searching for a new volunteering opportunity in France, and Aggelos is part of an active youth group that organizes European Mobility projects.

“As an epilogue to everything I learned, a professional opportunity directly related to my subject came to me thanks to my participation in the ESC program and sealed this experience; an opportunity that happened unexpectedly, like all the good things in life!”