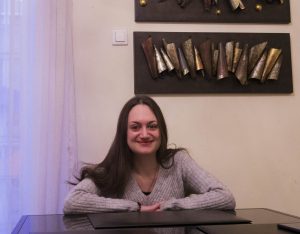 Eliana Vasileiou is EKO’s Project Manager and in charge of the coordination of EKO’s team. Eliana’s academic field is Neuro-Biology, holding a Bachelor degree in Molecular Biology from the University of Crete, Greece and a Research Master’s degree in Cognitive Neuroscience from Radboud University (RU), Nijmegen, Netherlands. Having studied and lived abroad, she has easily developed a multifaceted international profile working at the RU. During her postgraduate years in the Netherlands, she gained significant job skills being involved in intercultural youth work, in the context of RU’s “Orientation program” which provided support to international students facilitating their integration in the academic and social life of the city as well as their transition to their new studies environment. Her international identity has been reinforced by the fact that she originates from two different in mentality and culture countries, Greece and Germany, hence having acquired a valuable amalgam of personal valuers and dexterities which benefit her work.

Coming back to Greece from the Netherlands, Eliana has contributed to EKO’s project development and implementation for two years as a volunteer before she became a full-time staff member in 2018. As EKO’s Project Manager, Eliana has actively participated in a plethora of projects related to youth and vulnerable groups empowerment, as well as to environmental awareness and human rights advocacy. She has accumulated experience and know-how in proposal elaboration, project planning, preparation, implementation and reporting, event administration and event management. She has also worked as a mentor, education content designer and trainer on multiple occasions, collaborating with international and national institutions. She is also involved in research work as an expert and holds an advisory position in the “International Alliance of Peace and Sustainable Development” IAPD, being in charge of the EKO’s elaboration of interventions in side-events organized in the sidelines of the regular sessions of the Human Rights Council of the United Nations.

Furthermore, Eliana has a rich experience as a youth worker through her role as a team leader in multiple Erasmus+ projects, a mentor of volunteers and a facilitator of non-formal education workshops on project management and team management. Her high-quality skills in HR, project design and management, as well as in intercultural communication and human rights advocacy have strengthened EKO’s development, profile and extroversion and have contributed to an ongoing acceleration of achievements.