A Kick-off virtual meeting of KA203 project ERMIScom “Common curricula for diversity: education in media and integration of vulnerable groups” was held on 30.11-01.12 2020 & 14.12.2020, hosted by “Entrepreneurship and Social Economy Group” (EKO)

During the project’s Kick-off meeting, the partners’ representatives discussed organizational matters achieved on the basis of the project’s objectives. The meeting was coordinated by the hosting partner EKO, in collaboration with the Coordinating partner, the National Kapodistrian University of Athens (NKUA) and was attended by representatives of all partners.

The meeting started with the presentation of the consortium and an overview of the project. It provided the guidelines regarding future proceedings and pending tasks and presented the progress made on management issues since the initiation of ERMIScom project on October 1st, 2020. A detailed presentation of the Partnership Agreements’ provisions was delivered by the hosting partner EKO. The last session was devoted to the presentation of the project’s Financial Management, namely the financial and contractual rules as stipulated from EACEA and the Grant Agreement.

Click on the links below for the Presentations of Day 1:

Financial Management of the Project 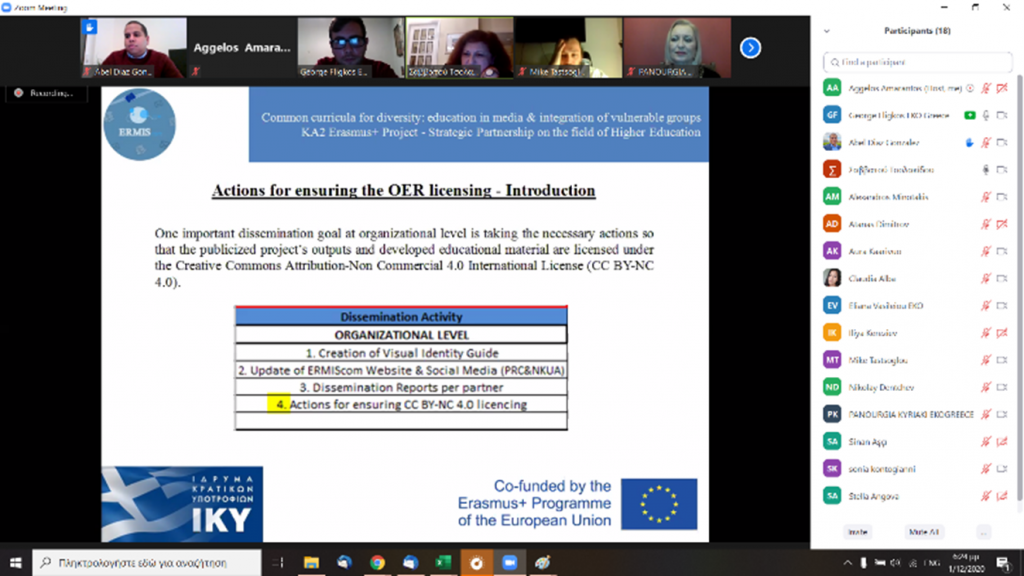 During the first part of the day, the hosting partner, EKO, presented the Dissemination Plan of the project as a whole and the reporting necessities, the project’s Visual Identity Guide, as well as a first version of the project’s Logo, analysing the symbolic meaning of its individual features. The partners discussed the pros and cons of different types of Open Licenses, to reach a common decision of the License that will be assigned to the project’s outputs and results. At the end of the session, a GANTT sheet regarding the publicity activities planned was demonstrated.

During the second part of the day, the partner Institutions coordinating the development of Intellectual Outputs 1-3 (BAU, UNWE, VUB respectively), discussed the progress made, the work completed and the upcoming tasks for each of those IOs. The IO-Coordinators described the academic sources that have been reviewed for the identification of the content of their IOs, the structure of the IOs into chapters and the changes made on the basis of the partners’ feedback. The Coordinators discussed the future steps of the development of each IO, in order to achieve smooth development and homogeneity among the different chapters.

The coordinating partner of the development of Intellectual Output 4 (NKUA), covered the same issues as the ones discussed for the previous three IOs.

Thereafter, METROPOLIA University, who is in charge of coordinating the development the project’s pedagogical approach and education methodologies, presented their proposed educational philosophy for the ERMIScom curriculum (social constructivism). They also analysed a series of methodologies to be embedded in the Intellectual Outputs first, and ultimately in the curriculum, which included problem based and phenomenon-based learning, flipped classroom, as well as topic-based learning through an interdisciplinary approach. They suggested tools, activities and evaluation methods to be used in the classroom in order to facilitate interactivity, full acquisition of knowledge, self-reflection and deep understanding by the students. All partners were invited to come up with suggestions to cover all perspectives.

The Kick-off meeting closed with a Q&A session and a recapitulation of all main points. It was decided that the next partners’ meeting will take place online, on January 25, 2021 and will discuss the progress of the deliverables the future steps and a discussion on the coordination of the Project’s immediate Dissemination Actions.